Character set is the combination of English language (Alphabets and White spaces) and math’s symbols (Digits and Special symbols). Character Set means that the characters and symbols that a C++ Program can understand and accept. These are grouped to form the commands, expressions, words, c-statements and other tokens for C++ Language.

Character Set is the combination of alphabets or characters, digits, special symbols and white spaces same as learning English is to first learns the alphabets, then learn to combine these alphabets to form words, which in turn are combined to form sentences and sentences are combined to form paragraphs. More about a C++ program we can say that it is a sequence of characters. These character from the character set plays the different role in different way in the C++ compiler. The special characters are listed in Table 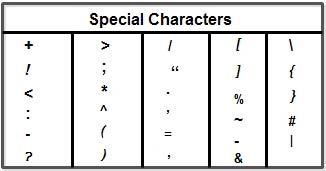 In addition to these characters, C++ also uses a combination of characters to represent special conditions. For example. character combinations such as ‘\nt, ‘\b’ and ‘\t’ are used to represent newline, backspace and horizontal tab respectively.

When we have to learn English language we start from beginning as given below:

When we have to learn C language we start from beginning as given below:

There are mainly four categories of the character set as shown in the Figure.

Alphabets are represented by A-Z or a-z. C- Language is case sensitive so it takes different meaning for small and upper case letters. By using this character set C statements and character constants can be written very easily. There are total 26 letters used in C-programming.

Digits are represented by 0-9 or by combination of these digits. By using the digits numeric constant can be written easily. Also numeric data can be assigned to the C-tokens. There are total 10 digits used in the C-programming.

All the keyboard keys except alphabet, digits and white spaces are the special symbols. These are some punctuation marks and some special symbols used for special purpose.