In 1640s, Computer term was first used as “one who calculates.”  From 1897, term changed and got a new computer meaning “Calculating machine“. From 1945 the term indicates as “programmable digital electronic computer“.


The word compute is derived from the Latin word ‘computare’, was meaning “arithmetic, accounting”.
The Computer meaning is the digital device that stores information in memory using input devices and manipulate information to produce output according to given instructions.
The actual machinery, the physical parts of a computer system refer to as Computer hardware; the instruction (a program) that tells the computer what to do or how to do, that is called Computer software (often called just software). 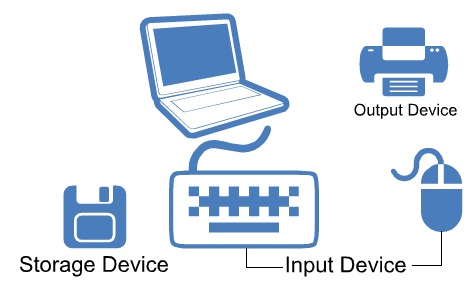 Technically, a computer means to calculate or electronic programmable machine.
Computer is used to perform some sequence of instructions in fast and accurate manner. Computer receives input in the form of digitized data, using input devices like keyboard, mouse, joystick, scanner etc. It process based on a program instructions to give output.

•  An analog computer or ‘analogue computer’ which is used to process analog data.
• Today most commonly type of computer that input information using discrete rather than continuous, is called digital computer that use ‘binary digits’.


• Memory: It is a physical device (integrated circuits or chip) that enables a computer to store data and programs temporarily or permanently. It is also term as “primary storage”.
• Mass storage device (MSD): It is used to store large amounts of data for example hard disks, USB drive, CD-ROM etc.
• Input device: It is any hardware device like keyboard and mouse that sends data to a computer.
• Output device: It is a device that sends data from a computer to another device.
• CPU (Central Processing Unit): It is also referred to as a processor or brains of a computer that carries out the instructions of a computer system. Professor Charles Babbage’s analytical engine considered as “fundamental framework of computer” is a mechanical general-purpose programmable computing engine. It was a successor to the Difference Engine.
Computer that we use today is absolutely different from the first generation computer. Evolution in technology from 19th century to present day modified computer totally.

In digital world, from a small wrist watch to space satellite all are controlled by computer. A small or large machine was handled by humans in past, but in digitalized world these are handled by programmed humans i.e. ‘Robots’.

Types of Computer, By Size

According to required services speed or efficiency different types of computers are available in market.