ASCII Stands for American Standard Code for Information Interchange (pronounced ‘as-key’).  This is a standard set of characters understood by all computers, consisting mostly of letters and numbers plus a few basic symbols such as $ and %. Which employs the 128 possible 7-bit integers to encode the 52 uppercase and lowercase letters and 10 numeric digits of the Roman alphabet, plus punctuation characters and some other symbols. The fact that almost everyone agrees on ASCII makes it relatively easy to exchange information between different programs, different operating systems, and even different computers.

It also means you can easily print basic text and numbers on any printer, with the notable exception of PostScript printers. If you are working in the Mac Write word processing application on the Mac and you need to send your file to someone who uses Word-star on the PC, you can save the document as an ASCII file (which is the same as text-only). After you transfer the file to the PC (on a disk or via a cable or modem),the other person will be able to open the file in Word-star.

In ASCII, each character has a number which the computer or printer uses to represent that character. For instance, a capital A is number 65 in the code. Although there are 256 possible characters in the code, ASCII standardizes only 128 characters, and the first 32 of these are “control characters,” which are supposed to be used to control the computer and don’t appear on the screen. That leaves only enough code numbers for all the capital and lowercase letters, the digits, and the most common punctuation marks.

Another ASCII limitation is that the code doesn’t include any information about the way the text should look (its format). ASCII only tells you which characters the text contains. If you save a formatted document as ASCII,you will lose all the font formatting, such as the typeface changes, the italics, the bolds, and even the special characters like ©, TM, or ®. Usually carriage returns and tabs are saved.

Unlike some earlier character encodings that used fewer than 7 bits, ASCII does have room for both the uppercase and lowercase letters and all normal punctuation characters but, as it was designed to encode American English it does not include the accented characters and ligatures required by many European languages (nor the UK pound sign £). These characters are provided in some 8-bit EXTENDED ASCII character sets, including ISO LATIN 1 or ANSI 1, but not all software can display 8-bit characters, and some serial communications channels still remove the eighth bit from each character. Despite its shortcomings, ASCII is still important as the ‘lowest common denominator’ for representing textual data, which almost any computer in the world can display.

The ASCII standard was certified by ANSI in 1977,and the ISO adopted an almost identical code as ISO 646. 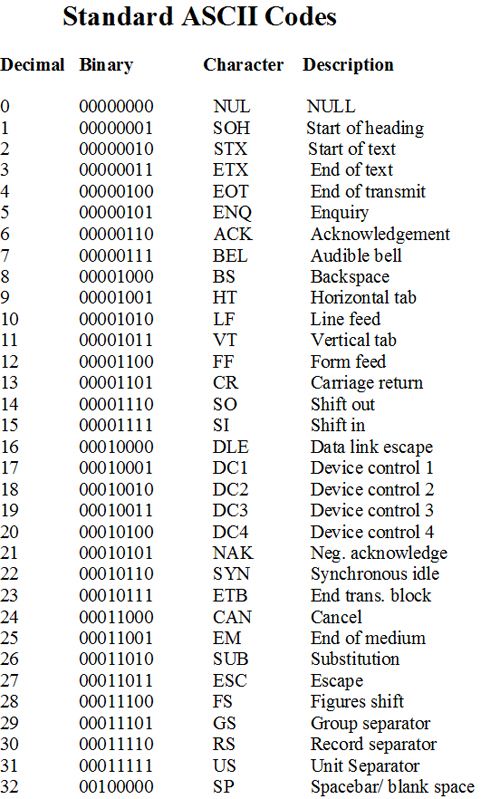