Home » Networking » Communication » Bluetooth – What is Bluetooth?
Next →
← Prev

• Bluetooth is, with the infrared, one of the major wireless technologies developed to achieve WPAN. Bluetooth is a wireless LAN technology used to connect devices of different functions such as telephones, computers (laptop or desktop), notebooks, cameras, printers and so on. Bluetooth is an example of personal area network.
• Bluetooth project was started by SIG (Special Interest Group) formed by four companies  IBM, Intel, Nokia and Toshiba for interconnecting computing and communicating devices using short-range, lower-power, inexpensive wireless radios.
• The project was named Bluetooth after the name of Viking king – Harald Blaat and who unified Denmark and Norway in 10th century.
• Nowadays, Bluetooth technology is used for several computer and non computer application:

1. It is used for providing communication between peripheral devices like wireless mouse or keyboard with the computer.
2. It is used by modern healthcare devices to send signals to monitors.
3. It is used by modern communicating devices like mobile phone, PDAs, palmtops etc to transfer data rapidly.
4. It is used for dial up networking. Thus allowing a notebook computer to call via a mobile phone.
5. It is used for cordless telephoning to connect a handset and its local base station.
6. It also allows hands-free voice comml1nication with headset.
7. It also enables a mobile computer to connect to a fixed LAN.
8. It can also be used for file transfer operations from one mobile phone to another.
9. Bluetooth uses omni directional radio waves that can through walls or other non-metal barriers.

Bluetooth is that when the device is with in the scope of a other devices automatically start the transfer information without the user noticing. a small network between the devices is created and the user can accessed as if there were cables.

• Piconet is a Bluetooth network that consists of one primary (master) node and seven active secondary (slave) nodes.

• Thus, piconet can have up to eight active nodes (1 master and 7 slaves) or stations within the distance of 10 meters.

• There can be only one primary or master station in each piconet.

• The communication between the primary and the secondary can be one-to-one or one-to-many.

• In addition to seven active slave station, a piconet can have up to 255 parked nodes. These parked nodes are secondary or slave stations and cannot take part in communication until it is moved from parked state to active state.

• A slave in one piconet can act as a master or primary in other piconet.

• Such a station or node can receive messages from the master in the first piconet and deliver the message to its slaves in other piconet where it is acting as master. This node is also called bridge slave.

• Thus a station can be a member of two piconets.

• A station cannot be a master in two piconets. 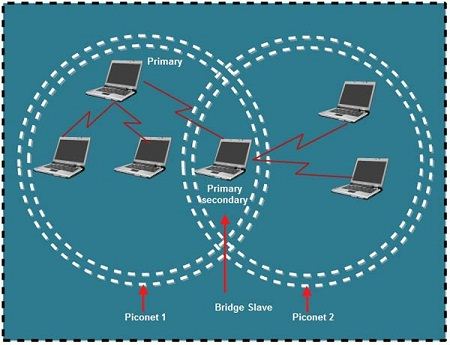 • Bluetooth standard has many protocols that are organized into different layers.

• The layer structure of Bluetooth does not follow OS1 model, TCP/IP model or any other known model. • The Bluetooth radio layer corresponds to the physical layer of OSI model.

• It deals with ratio transmission and modulation.

• The radio layer moves data from master to slave or vice versa.

• This band is divided into 79 channels of 1MHz each. Bluetooth uses the Frequency Hopping Spread Spectrum (FHSS) method in the physical layer to avoid interference from other devices or networks.

• In order to change bits into a signal, it uses a version of FSK called GFSK i.e. FSK with Gaussian bandwidth filtering.


• Baseband layer is equivalent to the MAC sublayer in LANs.

• Master and slave stations communicate with each other using time slots.

• The master in each piconet defines the time slot of 625 µsec.

• In TDD- TDMA, communication is half duplex in which receiver can send and receive data but not at the same time.

• If the piconet has only no slave; the master uses even numbered slots (0, 2, 4, …) and the slave uses odd-numbered slots (1, 3, 5, …. ). Both master and slave communicate in half duplex mode. In slot 0, master sends & secondary receives; in slot 1, secondary sends and primary receives.

• If piconet has more than one slave, the master uses even numbered slots. The slave sends in the next odd-numbered slot if the packet in the previous slot was addressed to it.

• In Base-band layer, two types of links can be created between a master and slave. These are:

• It is used for packet switched data that is available at irregular intervals.

• ACL delivers traffic on a best effort basis. Frames can be lost & may have to be re-transmitted.

• A slave can have only one ACL link to its master.

• Thus ACL link is used where correct delivery is preferred over fast delivery.

• The ACL can achieve a maximum data rate of 721 kbps by using one, three or more slots.

• sco is used for real time data such as sound. It is used where fast delivery is preferred over accurate delivery.

• In an sco link, a physical link is created between the master and slave by reserving specific slots at regular intervals.

• Damaged packet; are not re-transmitted over sco links.

• A slave can have three sco links with the master and can send data at 64 Kbps.

• The ACL link uses L2CAP for data exchange but sco channel does not use it.

• The various function of L2CAP is:

• L2CAP receives the packets of up to 64 KB from upper layers and divides them into frames for transmission.

• It adds extra information to define the location of frame in the original packet.

• The L2CAP reassembles the frame into packets again at the destination.

• At the sender site, it accepts data from one of the upper layer protocols frames them and deliver them to the Base-band layer.

• At the receiver site, it accepts a frame from the base-band layer, extracts the data, and delivers them to the appropriate protocol1ayer.

• L2CAP handles quality of service requirements, both when links are established and during normal operation.

• It also enables the devices to negotiate the maximum payload size during connection establishment.

The various fields of blue tooth frame format are: 1. Access Code: It is 72 bit field that contains synchronization bits. It identifies the master.

(i) Address: This 3 bit field can define up to seven slaves (1 to 7). If the address is zero, it is used for broadcast communication from primary to all secondaries.

(ii)Type: This 4 bit field identifies the type of data coming from upper layers.

(iii) F: This flow bit is used for flow control. When set to 1, it means the device is unable to receive more frames.

(iv) A: This bit is used for acknowledgement.

(v) S: This bit contains a sequence number of the frame to detect re-transmission. As stop and wait protocol is used, one bit is sufficient.

3. Data: This field can be 0 to 2744 bits long. It contains data or control information coming from upper layers