The data being transmitted is superimposed on the radio carrier so that it can be accurately extracted at the receiving end. Multiple radio carriers can exist in the same space at the same time without interfering with each other if the radio waves are transmitted on different radio frequencies.

In a typical WLAN configuration, a transmitter/receiver (transceiver) device, called an Access Point (AP), connects to the wired network from a fixed location using standard Ethernet cable. The Access Point receives, buffers, and transmits data between the WLAN and the wired network infrastructures. A single Access Point can support a small group of users and can function within a range of less than one hundred to several hundred feet.

The Access Point (or the antenna attached to the Access Point) is usually mounted high but may be mounted essentially anywhere that is practical as long as the desired radio coverage is obtained. The wireless network, printers or other peripherals can be shared through a connected PC. The devices then communicate using a set of reserved high-frequency radio waves. An Access Point device connects to a DSL or cable modem and enables high-rate (broadband) Internet access for the entire network.

Wireless LANs have become popular in the home due to ease of installation, and in commercial complexes offering wireless access to their customers; often for free. Large wireless network projects are being put up in many major cities.

Wireless networks are based on the IEEE 802.11 standards. A basic wireless network consists of multiple stations communicating with radios that broadcast in either the 2.4GHz or 5GHz band (though this varies according to the locale and is also changing to enable communication in the 2.3 GHz and 4.9 GHz ranges).

If your router is on the first floor and your PC or laptop is on the second floor, place the router high on a shelf in the room where it is located. Don’t worry if you can’t move your wireless router, because there are many other ways to improve your connection.

Infrastructure mode is used to connect computers with wireless network adapters, also known as wireless clients, to an existing wired network with the help from wireless router or access point. The 2 examples which I specified above operate in this mode.

Ad hoc mode is used to connect wireless clients directly together, without the need for a wireless router or access point. An ad hoc network consists of up to 9 wireless clients, which send their data directly to each other. Click here to learn more on this ad hoc mode. Based on the location of the orbit, satellites can be divided into three categories. 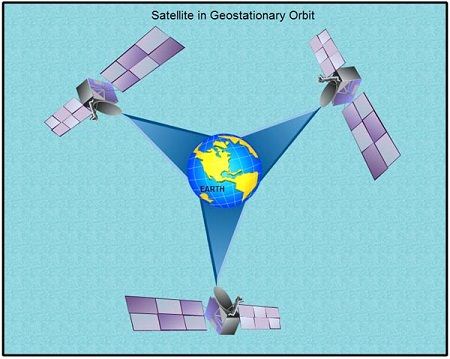 1. GPS is operated by US Department of Defense.

3. It is used for land, sea and air navigation to provide time and locations for vehicles and ships.

4. The orbits and the locations of the satellites in each orbit are designed in such a way, that at any time, four satellites are visible from any point on earth.

5. A GPS receiver is used that tells the current position of each satellite.

6. GPS is used by military forces to track the path and navigate vehicles and helicopters.

1. Little LEOs: operates less than 1 GHz. They are used for low-data-sate messaging.

2. Big LEOs: operates between 1 and 3 GHz. Examples of big LEOs are Globalstar and Iridium system.