The term Network Topology defines the geographic Physical or logical arrangement of computer networking devices . The term Topology refers to the way in which the various nodes or computers of a network are linked together. It describes the actual layout of the computer network hardware. Two or more devices connect to a link; two or more links form a topology. Topology determines the data paths that may be used between any pair of devices of the network.

The selection of a Network Topology for a network can not be done in isolation as it affects the choice of media and the access method used. Because it determines the strategy used in wiring a building for a network and deserves some careful study.

The following factors are considered while selecting a topology:

7. Delay involved in routing information from one node to another.

• While making a selection of a particular topology we consider the relative status of different devices that are to be linked.


• The nodes in a network can have following two relationships:

1. Peer to Peer: In this relationship, all the devices in the network have equal status in sharing the link. For example, Ring & Mesh topology.

2. Primary-Secondary: In this, one device controls the traffic and all other devices transmit through primary device. e.g. Star topology.


The three simple Topology that are combined to form a basic Network Topology. They are, Bus Topology, Ring and Star Topology.


The physical Bus Network Topology is the simplest and most widely used of the network designs. It consists of one continuous length of cable (trunk) that is shared by all the nodes in the network and a terminating resistor (terminator) at each end that absorbs the signal when it reaches the end of line. Without a terminator the electrical signal would reach the end of copper wire and bounce back, causing errors on the network.

Bus networks make up what is known as a passive topology. Bus-connected computers act “expectantly,” that is, before transmitting data, they verify that none of the other computers on the bus are transmitting information, sending packets when the connection is free. In general, passive networks based on contention (so-called because each computer has to compete for the transmission time).

Bus networks usually use coaxial cables that connect to each of the computers through T-shaped connectors. A terminator specific to the type of cable used placed on each end node of the network (if a cable used 50 Ohm, 50 Ohm terminators must use). Since the bus network is nothing more than a set of cables, connectors, and terminators, the signal is not amplified when traveling through the wiring. 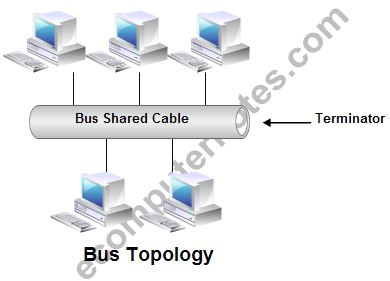 Data communication message travels along the bus in both directions until it is picked up by a workstation or server NIC. If the message is missed or not recognized, it reaches the end of the cabling and dissipates at the terminator. Bus Network Topology requires a multipoint connection .

All nodes on the bus topology have equal access to the trunk. This is accomplished using short drop cables or direct T-connectors. The number of devices and the length of the trunk can be easily expanded.

Bus networks are easy to assemble and expand. They only require a small amount of cable, compared to other network topologies. However, bus networks can suffer cable breakage, loss of information in the connectors and deficiencies in the necessary wiring length, often difficult to resolve. Any physical problem in the network, such as a loose connector, can ground the entire bus network. When bus topology networks do not close properly, the network tends to experience rebounds in signal transmission. If the bus topology used, the physical aspects of the network should always be checked to avoid any problems. Problems with connectors, cables, and terminators often abound in this type of network.


The advantages of physical bus topology are:


The disadvantages of bus Topology are:


The physical ring Topology is a circular loop of point-to-point links. Each device connects directly to the ring or indirectly through and interface device or drop cable. Message travel around the ring from node to node in a very organized manner. Each workstation checks the message for a matching destination address. If the address doesn’t match the node simply regenerates the message and sends it on its way. If the address matches, the node accepts the message and sends a reply to the originating sender.

• In ring topology, the various nodes are connected in form of a ring or circle (physical ring), in which data flows in a circle, from one station to another station.

• It has no beginning or end that needs to be terminated.

• In this topology, each device or node has a dedicated point to point line configuration with only two devices on either side of it.

• Signal is passed along the ring in one direction from one station to another until it reaches destination.

• Each device in ring incorporates a repeater.

• When a device receives a signal intended for another device, its repeater regenerates the bits and passes them along.

• There are two kinds of ring topologies:

•. In this topology, each device or node has a dedicated point to point line configuration with only two devices on either side of it.

• Signal is passed along the ring in one direction from one station to another until it reaches destination.

• Each device in ring incorporates a repeater.

• When a device receives a signal intended for another device, its repeater regenerates the bits and passes them along.

• There are two kinds of ring topologies: 1. Single ring – In single ring network, a single cable is shared by all the devices and data travel only in one direction.

Each device waits for its turn and then transmits. When the data reaches its destination, another device can transmit.

2. Dual ring: This topology uses two rings to send the data, each in different direction. Thus allowing more packets to be sent over the network.


The advantages of Ring Topology are:

The disadvantages of ring topologies are:


The physical star Topology uses a central controlling or hub with dedicated legs pointing in all directions – like points of a star. Each network device has a dedicated point-to-point link to the central hub. There is no direct link between these computers and the computers can communicate via central controller only. This strategy prevents troublesome collisions and keeps the lines of communications open and free of traffic. Since in the star topology each computer on the network uses a different cable connection, this type of topology is expandable, only limited by the number of ports available in the hub (although it is possible to join several hubs to increase the number of ports ). The expansion of a star topology network does not present any difficulty, since adding another computer to the network means nothing more than placing a cable between the computer and the hub. In fact, the rest of the network users will not even notice the extension. 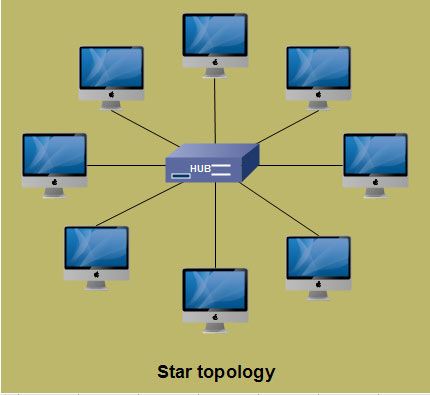 This Topology, obviously, require a great deal of cabling. This design provides an excellent platform for reconfiguration and trouble-shooting. Changes to the network are as simple as plugging another segment into the hub and a break in the LAN is easy to isolate and doesn’t affect the rest of the network.

The benefits of star topology are:

1. It is easier to add new node or modify any existing node without disturbing network i.e. expansion is easier.

2. Addition of new node does not increase communication delay.

3. If any local computer or link fails, the entire system does not collapse. Only that link or computer is affected.

4. It is easy to find device and cable problems i.e. fault identification and isolation is easier.

5. Media faults are automatically isolated to the failed segment.

The disadvantages are considered as follows:

1. If the central controller or hub fails, entire system collapses.

2. Cabling cost is more as each node is connected individually to the hub.

3. Requires more cable than most topologies

The type of  Topology in which each of the nodes of the network is connected to two other nodes in the network, with two connections to each of these nodes, and with the first and last nodes being connected to each other with two connections, forming a double ring – the data flows in opposite directions around the two rings, although, generally, only one of the rings carries data during normal operation, and the two rings are independent unless there is a failure or break in one of the rings, at which time the two rings are joined to enable the flow of data to continue using a segment of the second ring to bypass the fault in the primary ring.

• Very orderly network where every device has access to the token and the opportunity to transmit.
• Performs better than a star topology under heavy network load.
• Does not require network server to manage the connectivity between the computers.

• One malfunctioning workstation or bad port can create problems for the entire network.
• Moves, adds and changes of devices can affect the network.
• Much slower than an bus network under normal load.

Mesh networks are more expensive and difficult to install than other types of network topologies due to the large number of connections they require. In most cases, networks that use this redundant connection strategy included within the broader hybrid networks. In a hybrid network, only the most essential and crucial servers and computers configured with redundant connections. In this way, the fundamental segments of the corporate network protected without using multiple lines for each of the computers connected to the network.

2. There is no traffic congestion problem as dedicated links are being used. 
1. Connecting each device to every other device in the network makes installation and reconfiguration difficult.

2. It has high cabling cost as n (n-l)/2 links are required to connect n nodes.

The type of network topology in which each of the nodes of the network is connected to each of the other nodes in the network with a point-to-point link – this makes it possible for data to be simultaneously transmitted from any single node to all of the other nodes. The physical fully connected mesh topology is generally too costly and complex for practical networks, although the topology is used when there are only a small number of nodes to be interconnected. • Overall length of each segment is limited by the type of cabling used.
• If the backbone line breaks, the entire segment goes down.
• More difficult to configure and wire than other topologies.
• It has higher cabling cost in setting up a tree structure. When two hubs of different topologies are joined so that the devices attached to them can communicate as in figure, it is called a Star-Bus network.

When two or more star topologies are linked together using a specialized hub called a MAU (Multi-utilization Access Unit), it is known as Star-Ring topology.